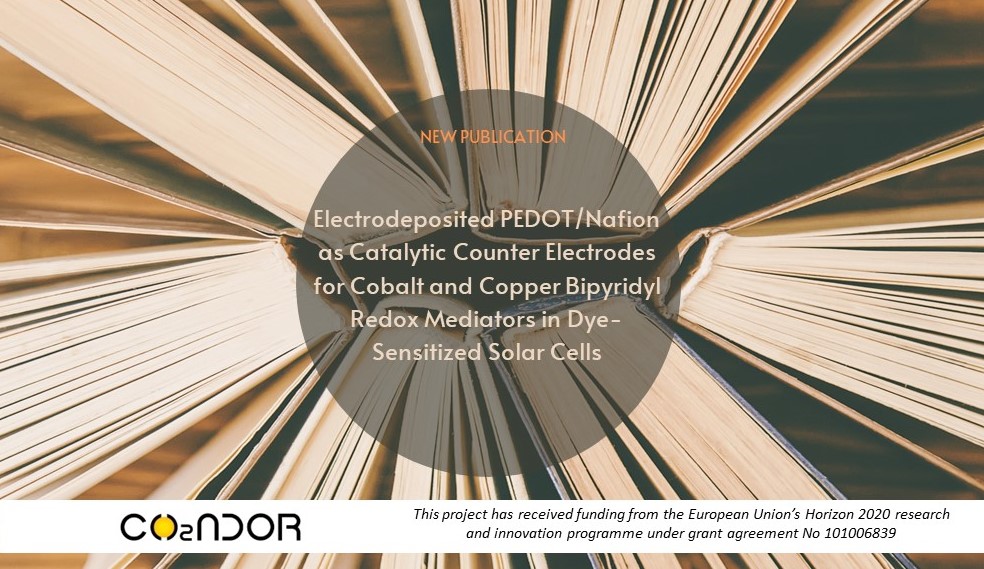 We are glad to promote a new publication prepared with the participation of our partner University of Ferrara entitled “Electrodeposited PEDOT/Nafion as Catalytic Counter Electrodes for Cobalt and Copper Bipyridyl Redox Mediators in Dye-Sensitized Solar Cells”.

PEDOT-based counter electrodes for dye-sensitized solar cells (DSSCs) are generally prepared by electrodeposition, which produces polymer films endowed with the best electrocatalytic properties. This translates in fast regeneration of the redox mediator, which allows the solar cell to sustain efficient photoconversion. The sustainable fabrication of DSSCs must consider the scaling up of the entire process, and when possible, it should avoid the use of large amounts of hazardous and/or inflammable chemicals, such as organic solvents for instance. This is why electrodeposition of PEDOT-based counter electrodes should preferably be carried out in aqueous media. In this study, PEDOT/Nafion was electrodeposited on FTO and comparatively evaluated as a catalytic material in DSSCs based on either cobalt or copper electrolytes. Our results show that the electrochemical response of PEDOT/Nafion toward Co(II/III-) or Cu(I/II)-based redox shuttles was comparable to that of PEDOT/ClO4 and significantly superior to that of PEDOT/PSS. In addition, when tested for adhesion, PEDOT/Nafion films were more stable for delamination if compared to PEDOT/ClO4, a feature that may prove beneficial in view of the long-term stability of solar devices.

The publication can be accessible at the following link:

We use cookies on our website to give you the most relevant experience by remembering your preferences and repeat visits. By clicking “Accept All”, you consent to the use of ALL the cookies. However, you may visit "Cookie Settings" to provide a controlled consent.
Cookie SettingsAccept All
Manage consent

This website uses cookies to improve your experience while you navigate through the website. Out of these, the cookies that are categorized as necessary are stored on your browser as they are essential for the working of basic functionalities of the website. We also use third-party cookies that help us analyze and understand how you use this website. These cookies will be stored in your browser only with your consent. You also have the option to opt-out of these cookies. But opting out of some of these cookies may affect your browsing experience.
Necessary Always Enabled
Necessary cookies are absolutely essential for the website to function properly. These cookies ensure basic functionalities and security features of the website, anonymously.
Functional
Functional cookies help to perform certain functionalities like sharing the content of the website on social media platforms, collect feedbacks, and other third-party features.
Performance
Performance cookies are used to understand and analyze the key performance indexes of the website which helps in delivering a better user experience for the visitors.
Analytics
Analytical cookies are used to understand how visitors interact with the website. These cookies help provide information on metrics the number of visitors, bounce rate, traffic source, etc.
Advertisement
Advertisement cookies are used to provide visitors with relevant ads and marketing campaigns. These cookies track visitors across websites and collect information to provide customized ads.
Others
Other uncategorized cookies are those that are being analyzed and have not been classified into a category as yet.
SAVE & ACCEPT
Powered by